I really can't believe that it's been six weeks since I last posted on here! The time has just flown.
First there was the 'Christmas rush' and trying to get all the orders out on time. These included a new outfit for Mr White who was appearing in a 'Dickens' production over Christmas - at Williamsburg! We made him a nice warm outfit as it normally snows in Virginia at this time of year, unfortunately the weather had other ideas - and delivered 70 degrees of warm sunshine!
Then I came down with flu' and recovered just in time for us to fly to Spain for the holidays. 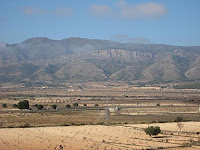 Now in the campo (countryside) it has cold nights but in the daytime reached about 20, which was very comfortable. -A little better than an outdoor event I did in Peterborough, in November, where it was minus 6!

Now back in Britain where the new year spreads before us like virgin snow, or should that be Virginia snow?

Posted by Tony at 14:46 No comments: Links to this post