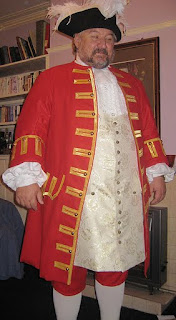 A Town criers' clothing from the early part of the 18th Century. The client is the crier for Castle Donnington, a town in the midlands, which has had a town crier since the late 1200's!
This position going back so far, Terry decided that he ought to have an earlier costume than most town criers, who usually decide on a  coachmans  coat  from the regency or early victorian - and because he liked the style!

I am aware that this blog is read in over 20 countries, so I'd better explain what a 'crier' did.
Really, he was  a town officer who made public proclamations, normally using a trumpet or bell to gain the attention of the crowd, before bellowing the news or public notices as loudly as he possibly could! Usually announcing his presence by shouting 'Oyez! Oyez! Oyez! (or similar, it seems nobody can decide or find out what was originally done)!


Competitions are held throughout Britain for the loudest and best dressed crier - We think that Terry is in with a shout - for both categories!
Posted by Tony at 11:34 No comments: Links to this post