A Coat of many stitches....

This one is a 'fair copy' of the boys red wool suit in the V.&.A (Ref:- No. T.327&A-1982)
The coat is made from the finest superfine melton wool and is raw edged at fronts, hems & cuffs. It is embroidered down the front, the centre back vents, the cuff tops and edges and the pockets in gold. It is fully lined and the fronts and cuffs are interfaced and then faced the same wool as the
outer. The neckedge is bound with 1/4" binding of the wool. All the linings, interfacings and facings are stitched in by hand in the same way as the originals were.
The Breeches are made from the same wool and lined in linen. They are also embroidered down the front outside leg to match the coat. 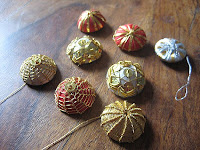 Before work could proceed, a sample of the embroidery was produced so that decisions about the buttons could be made. After a great deal of research on passementerie buttons 1690 -1720 and a fruitless worldwide search for an acceptable button of the right size [1"], we decided that reproduction passementerie buttons were the only solution. Starting with finding or producing a workable button mould, which was a feat in itself, we ended up producing our own wooden moulds in house and with several samples to show our client, one of which took two hours to make! 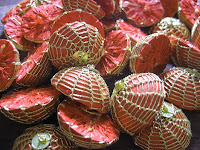 The entire suit took 105 hours to produce, 20 of which were spent on the 39 buttons, 23 on designing and embroidery programming, 21 on actual embroidery and the rest on cut and makeup.

This outfit has its' own web album here
Posted by Tony at 10:10 5 comments: Links to this post