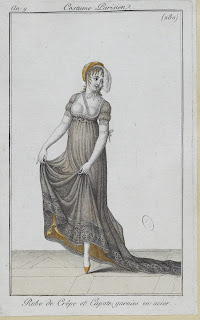 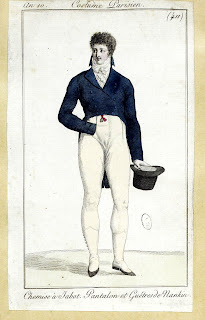 An entry in my Diary for Thursday reads  'Fit in Bath'.  It wasn't to remind me to change our hygiene facilities, but to remind me that a couple of our customers from Luxembourg were having a holiday there and we had to meet them for a fitting. While we were there we had a few other appointments but managed to do a couple of other things and played at being tourists for a change. We visited the Jane Austen centre and found that Dave Baldock and his team had changed the mannequin of Captain Francis Austen.  We also visited the Bath Fashion Museum, as collections like that always have something to teach us.
Using extant garments, the actual original garment is what we call  'Primary Evidence' or 'Primary Source'.  Writings of the time, woodcuts and portraits we call 'Secondary Evidence'.  Modern writings, Tertiary evidence. This differs from the way that most modern researchers classify, but it suits us.
The first thing to mention is that everything must be checked. Even original garments could have been changed, in fit or in purpose or even in colour!
Secondary & Tertiary evidence can be even worse as each step away from the original can bring bias, perspective and the sometimes, limited knowledge of the writer into play.

Most costumiers out there will have made something following the patterns of Janet Arnold - who was one of the best researchers of historical costume.
Don't get us wrong we think that she was one of the best ever and we use her books all the time - here's the 'but'!
We have done the same, but if you see the original garment after studying Janet's patterns, you will notice the odd detail not included or that you interpreted a detail quite differently from the original even though it was notated.

Even if the garment you're making is not meant to be accurate, surely, as an historical costumier you should know the differences!

The pictures show a couple of amusing fashion plates from the many, many hundreds of 'Secondary source' plates we have here.
Posted by Tony at 12:51