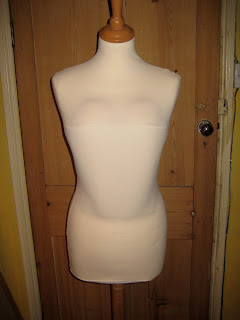 One of our friends was remarking the other day  that he'd been into a popular store to get some shoes and the assistant had some bad news for him when he requested his size - 10
(English)
"You want a size that is outside the ordinary, and of course, they sell out first!" he was told.
The same applied when he contacted someone 'on line' for regency boots. "I'm sorry we don't stock boots with that calf size, but we get a lot of requests for them!" the voice on the phone said.
Clearly, there is something wrong here!

The question also came up yesterday in a discussion we were having about tailors' dummies and dress forms. It seems to us that those on sale at the moment do not reflect the 'modern' body and haven't done for a few years. Now notwithstanding the possibility that all of our customers are unusual in some way, (we don't think so!) this tends to suggest the industry supporting the fashion & clothing world, are out of step with changes in national  body shape for men women and children. If this is true, it beggars belief, given the sheer volume of published surveys documenting these very changes. For the longest time Britons have suffered the lack of any standardised sizing in the shops,  when we are told by a client that they usually take a dress size 14 (English again!) for example, we have to ask where they are shopping! Marks & Spencer have very different sizes to Monsoon for instance

Nape to waist measures, particularly in men are elongating. Our male dummies are permanently extended to their maximum length and we are noting this is is not enough, on average by 1 1/2" !  We are talking adjustable tailors forms here, but display forms are also seriously 'out of kilter'.
Four to five years ago this did not seem to be an issue. We would be be VERY interested if others are finding the same thing.

As Alfred Pearlman once wrote "After you've done a thing the same way for two years, look it over carefully. After five years look at it with suspicion....and after ten - throw it away and start all over again!"

So to those that make tailors dummies. Your ten years are now up!


The Picture shows a modern display dummy,  reformed to give a 1660 corseted shape
Posted by Tony at 20:52